The Fatigue and Frustrations of Marc Gasol

Breaking down the fatigue and frustrations of Marc Gasol.

Share All sharing options for: The Fatigue and Frustrations of Marc Gasol

The Grizzlies are struggling right now, and a huge part of it is due to the fact that Marc Gasol is not himself. The All-Star center is noticeably struggling more than he has in a long time. The fatigue of an arduous NBA season has caught up to him and caused a frustration that we haven't seen from Gasol before.

Marc Gasol is asked to do more than any player in the NBA, and it's starting to catch up to him. He's tired from carrying a load that not even LeBron James, Kevin Durant (when healthy. GET WELL SOON KD!), or James Harden is asked to carry.

He has to anchor a top-10 defense by calling out plays, putting teammates in the right spots, and attempting to protect the rim and defensively rebound. Sometimes the Grizzlies' star center will move around the court, focusing so much on defense (oh and he's fucking great at it) that he is in awful rebounding position. This is what has made Zach Randolph and Gasol such a great match. Gasol focuses on defense while ZBo either gets a rebound or clears enough space for a guard to swoop in and grab it.

Your weekly update on the playoff seeding in the Western Conference looks a bit different than it has recently due to Memphis being out-classed by the NBA's elite in the last three games. Never fear, however; things could be coming up Grizzly soon.

Ongoing thread for all discussions related to the NBA Draft on June 25th, 2015

The defense has slipped a good deal since the All-Star break. The Grizzlies aren't rebounding because Gasol is trying cover up so many Grizzlies mistakes that he can't get to the rim, or he's so exhausted that all he can muster is a pitiful swipe masked as an attempted kick-out. I can't remember the last time I saw him in this kind of state. Now Gasol is fouling at a rate I've never seen from him before. In his last 10 games played, Gasol has had 3+ fouls eight times. He has fouled out twice. He fouled out only once in all of last season, and I'm pretty sure that was an awfully officiated game. He's not moving his feet like the Gasol we're used to. He's swiping at the ball much more, or just fouling so he doesn't get scored on.

Everything has changed for Gasol on the offensive end this season. He is now expected to average 20 points on 15 shot attempts despite it being completely against his nature. The offense runs through him in the high post, or he is running a pick-and-roll with Mike Conley. His usage percentage is at 24.7% this season. That's two points higher than he's ever been used before. He's also shooting 13.3 shots per game, which is the highest of his career. Using Gasol more and having him be more aggressive has culminated in some great performances, but has tired him out down the stretch.

Marc Gasol has never been the first option for the Grizzlies offense. It's always been Marc Gasol playing second fiddle to Zach Randolph. It's been pass first, pass second, and maybe score third for Gasol. Fans have been frustrated with his passive nature for seasons now. He would pass up an open shot for the right offensive play. There's nothing wrong with this when Zach Randolph has the ability to carry the offense, but he can't do that night in night out like he used to. Now it's on Gasol to be the guy he may not want to be every night.

At a certain point, this falls on the shoulders of the coach. There's a reason everyone was so excited about the acquisition of Kosta Koufos. He was the backup that Gasol had always needed but never had. At this point in the season, Kosta Koufos is averaging 16.6 minutes per game, while Gasol leads the team with 33.6 minutes per game. This is lower than years past (.2 more than last year), but Gasol has never been asked to be the guy he is now on both ends.

It's not like Koufos is a downgrade on the defensive end. He may actually be an upgrade at this point of the season.

Over the last two seasons, Gasol has played 4,388 minutes of NBA basketball. And let's not forget the amount of international basketball the Spaniard has played over his career. Even if his summer did end early, he played a good amount of basketball. The Grizzlies' "Grit and Grind" playing style does not help one keep a fresh body. Every game - last season especially - is a grind until the end. The Grizzlies rarely blow anyone out so I understand why Coach Joerger plays Gasol the way he does sometimes, but he's gone overboard.

In comparison Kosta Koufos has played 2,542 minutes over the last two seasons. And he started 22 games in Gasol's absence last season. It's not like Koufos is a downgrade on the defensive end. He may actually be an upgrade at this point of the season. According to NBA.com defensive tracking, Koufos is defending better within 6 feet of the basket than Gasol. Opponents are shooting 51.2% on Koufos while opponents shoot 56.1% on Gasol. Koufos is not going to be anywhere near the force Gasol is on offense, but he is good in the pick-and-roll with Conley, and has some good post moves.

It's just downright stubborn to run your best player into the ground while a serviceable backup rides the pine. There is no shame in sitting him for a week or two. The basketball gods will not fly down and strike you for sitting him. LeBron James took two weeks off in the middle of the season because he was in the same boat Gasol is in now. He had played huge amounts of minutes in the playoffs and in international competition. He needed rest. Tim Duncan rests all the time and you don't see him being judged for it. I know Duncan has rested games he was ready to play, but it's not on the player to decide. I'm sure Marc Gasol would play every possession, so it's on Coach Joerger to sit him. Going into the playoffs rested and healthy is more important than anything else at this point.

It's so obvious that Gasol is frustrated. He looks more frustrated than he's ever been in a Grizzlies uniform.

After fouling out in the Grizzlies loss to the Detroit Pistons Marc sat in the floor in total frustration and disbelief. He didn't move for a solid minute or so. I've never seen him do that before. That's where some of his fouls are coming from these days, though. They are out of frustration after a missed call from the referee or a missed shot. His shots are falling way short of the rim due to the fatigue he is experiencing.

Instead of the trademark Gasol self-buttslap after he does something awesome, we are seeing the Marc Gasol "I want to putt this ball through the floor so I can destroy the devil's face for forsaking me with this bullshit" ball-slam more and more often. It comes after every bad defensive possession or a missed shot that will barely rim out. It was once a rare occurrence, but now is commonplace within a single game. It's gotten to the point where he will get technicals for it. 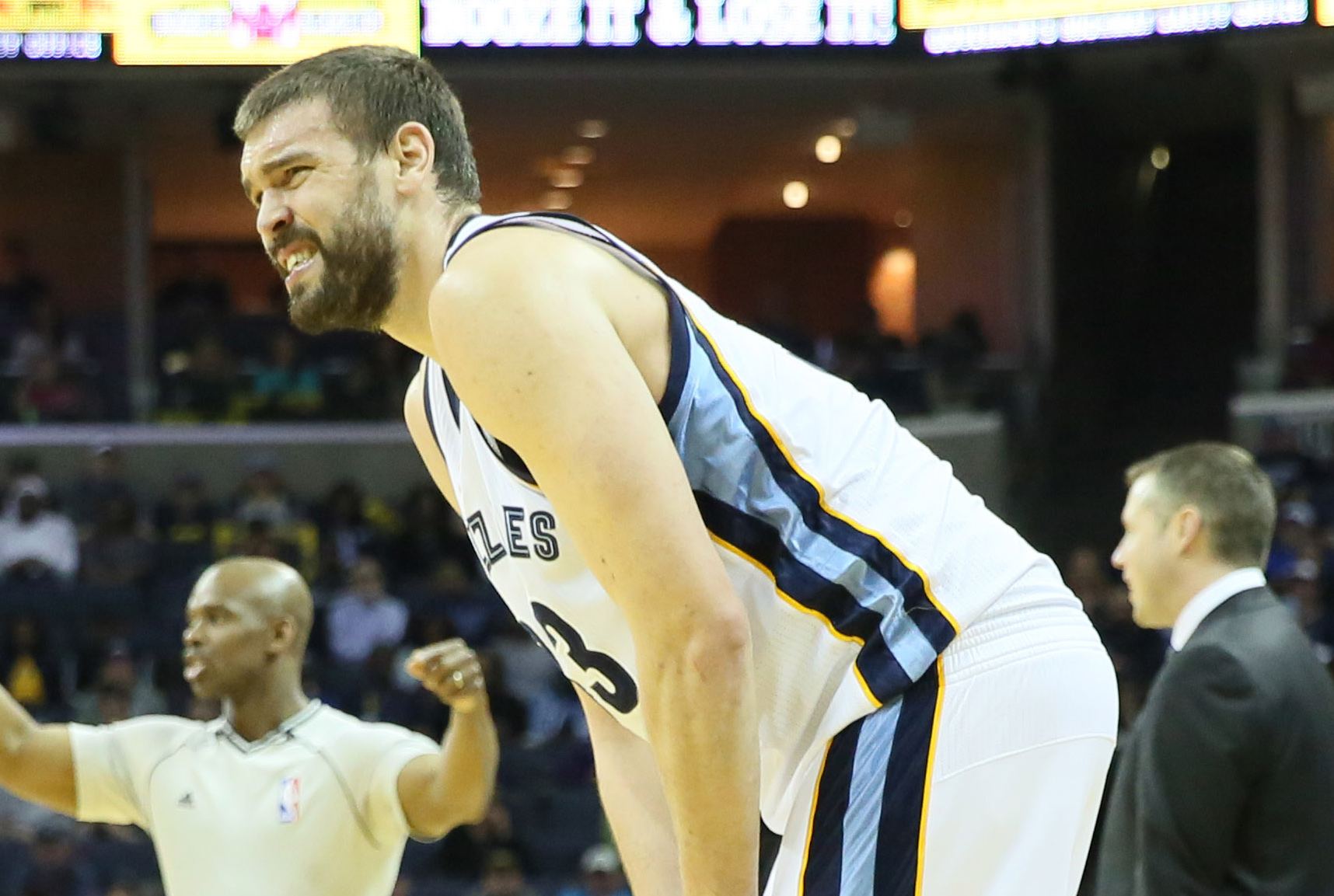 Gasol has plenty of reasons to be frustrated. Offensively, his shots are falling short, and he's turning the ball over more than ever. That is expected with the increase in usage, but he's elevated losing the ball in the post to an art form. He'll keep the ball too low, which big men know not to do, or he'll bobble the ball on the catch because of a quick double team. Many teams have been doubling Gasol and Randolph in the post lately due to the Grizzlies' complete lack of outside shooting. This has led to more turnovers, less shot attempts, and a jumbled Grizzlies offense.

The defense Gasol has hung his hat on has struggled in the third quarter since the All-Star break. Guards not named Tony Allen aren't playing four quarters of good defense and can't keep their man in front of them. This leaves Gasol to foul or give a defender an open shot. His post defense hasn't exactly been perfect lately either. He's either giving too much space or he feels he can't be as physical he wants to be due to the officiating.

Not just Gasol, but the whole Grizzlies team has started arguing with the officials more than ever before. Gasol isn't the biggest culprit (LOOKIN' AT YOU COURTNEY LEE), but it's gotten to a tipping point. It's becoming a noticeable interruption in the game. The teams from Memphis are notorious for not complaining and just playing. Now they are relying on the referees to help them out like never before. I will admit that I think Gasol is definitely treated like a former Defensive Player of the Year award winner by the officials, but that doesn't give him license to complain as much as he is.

Most of Gasol's frustration can be cured by playing well and winning. This wasn't a problem in the Grizzlies' three wins over the Portland Trailblazers, Dallas Mavericks, and New York Knicks over a week ago. But everything is going in the opposite direction. The Grizzlies are losing and it's affecting chemistry. Winning cures most complaints, but the winning won't come until Marc Gasol is back to being Marc Gasol. That's going to take rest and Coach Dave Joerger realizing that he's going to end Gasol's marvelous career early if he keeps playing him like this.