How Memphis' Grit N' Grind Defense Has Dominated the Blazers

During the last couple of weeks, the Grizzlies' hard-nosed defense has returned. This fact has been epitomized by their defensive performance this playoff series thus far.

Share All sharing options for: How Memphis' Grit N' Grind Defense Has Dominated the Blazers

More on the Blazers

More on the Blazers

On Wednesday night, the Grizzlies had a slow start to the game, but after the first quarter, their defense started firing on all cylinders. Their weak first quarter was followed by a strong second quarter in which Memphis scored 33 points and held Portland to 24 points. During that game, there was one play in particular that symbolized what the Grizzlies' defense was all about. After a Zach Randolph 5-foot jumper, the Blazers were down 55-70 in the third quarter. On the other side of the court, C.J. McCollum took a shot which was promptly blocked by Marc Gasol. LaMarcus Aldridge grabbed the offensive board and tried to put it back up, but his effort was futile, however, as Jeff Green rejected his attempt. The Blazers grabbed another offensive rebound, but the shot clock rang out, signaling a Portland shot clock violation. The entire FedEx Forum was roaring with joy as they witnessed the defensive effort by the entire Memphis team. Zach Randolph shouted out, and Marc Gasol made an emphatic gesture with his arms. The bench celebrated, and the Grindhouse was rocking. Many NBA fans do not appreciate the gritty defensive plays of basketball; they prefer high-flying dunks and threes. But Memphis' fans savor defensive plays like this and the moment when Rick Trotter, arena voice of the Memphis Grizzlies, yells in his thunderous voice "SHOT CLOCK VIOLATED!"

In the postseason, Memphis is averaging 8.5 steals per game and 8.0 blocks. The Grizzlies are ranked third in opponent field goal percentage this postseason, holding the Blazers to 44% shooting overall. Plus, the Grizz are forcing Portland to shoot just 30.4% from beyond the arc. During the regular season, Portland shot 36.2% from three. Although the Blazers are missing some key players, the Grizzlies' defense has been impressive nevertheless. 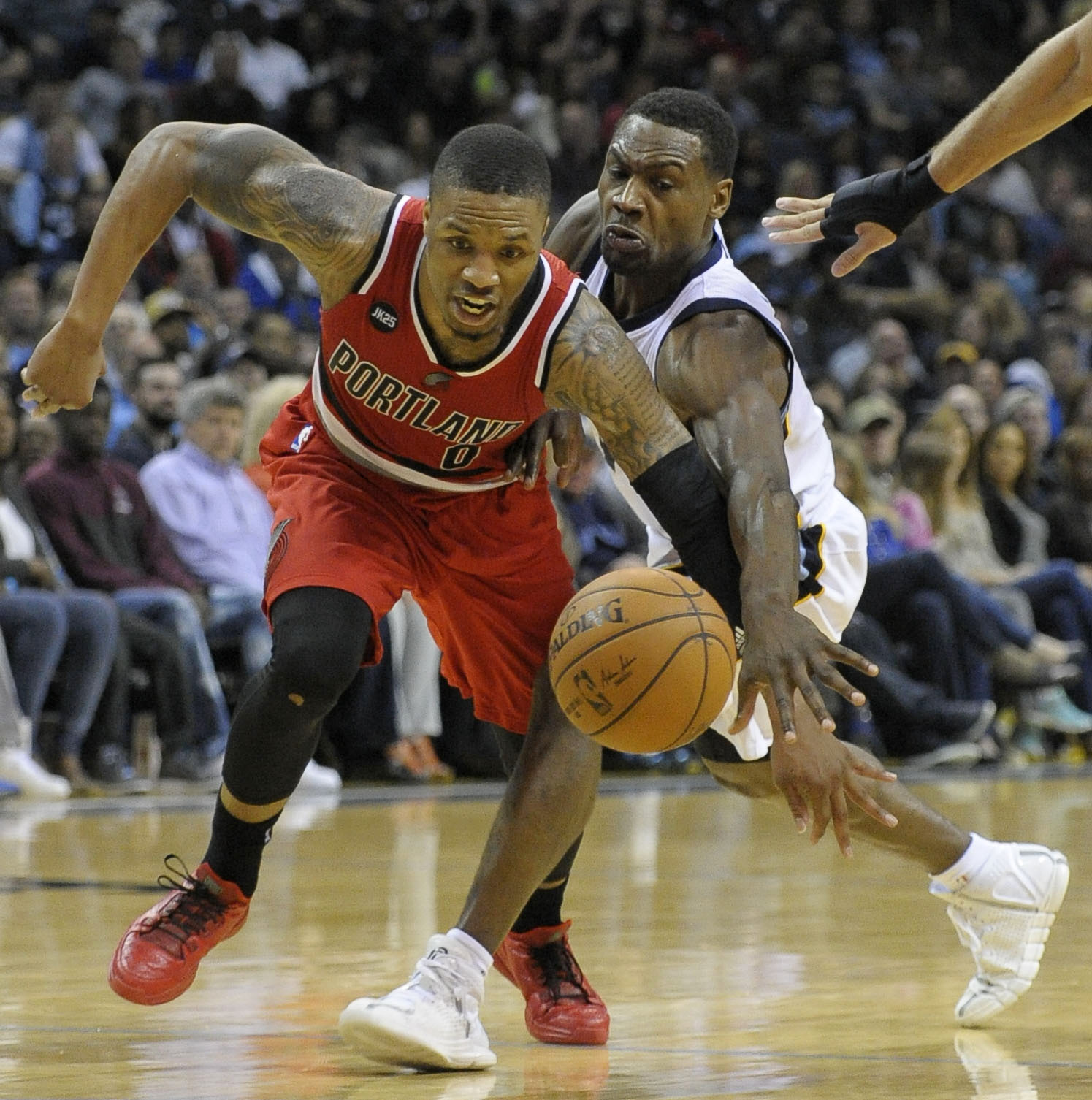 And when Memphis' defense is firing, so is their offense. Over the past two games, Memphis is shooting 44% from three and averaging 98.5 points per game. On the boards, the Grizz are grabbing 71.9% of the available rebounds and have an offensive rating of 104.5, which is above their regular average of 103.1.

Individually, Courtney Lee has been shutting down his opponents. Against Lee, opponents are shooting -23.2% less than their normal field goal percentage. Tony Allen himself is causing opponents to shoot -6.3% less than their average field goal percentage as well. Marc Gasol has continued to be a dominant defensive presence in this series, as he's forcing Portland players to shoot -9% less. Defense is a team effort, and everyone is contributing to the shutdown of Portland. Mike Conley has done a tremendous job on Damian Lillard, causing Lillard to shoot just 27% from the field and 9.1% from beyond the arc.

Now, Memphis heads to Portland for two games. The thing is, defense travels well. Defense depends on effort and execution. And we've seen plenty of those two things the past couple of games. The Grit n' Grind era may not last forever, but let's enjoy these iconic defensive performances by the Memphis Grizzlies during this playoff run.