I've never been to Portland before, but what I found was both different and familiar. Also, I went to a basketball game and wrote about it.

Share All sharing options for: Portland and Memphis: Two Cities

I'm in Portland. I'd heard about the weirdness – the granola, the obsessive eco-friendliness, the people who choose tricycles as their primary mode of transportation – but existing alongside all of that is something else; despite Mt. Hood looming in the distance, despite the fact that there is seafood on the menu other than catfish, despite the trashcans whose compacting mechanisms are powered by candy bar-sized solar panels, Portland reminded me of Memphis.

This is where my mind has wandered as I attempted to Vine Wes Matthews coming out of the tunnel in an Iron Man helmet. I had no idea his nickname was Iron Man, but apparently it is a thing, and the crowd ate it up.

How weird is sports? So weird that a man unironically wearing the helmet of a comic book hero/Robert Downey Jr. can whip thousands of people into a frenzy. Portland loves them some Wes Matthews, and with good reason. He is one of the best TWO WAY shooting guards (Copyright: NBA pundits, 2014) in the NBA, and he suffered one of the few injuries catastrophic enough to end his season.

It is loud inside the Moda Center. Sorry I called it that. That was the name on the side of the building, and it's my first time here. The fans have been given predominantly red shirts. Fans given white shirts spell out RIP CITY in the lower bowl opposite us. Glowing red inflatable noise sticks wave menacingly like lightsabers during the player intros. In this sea of red, the wife and I stand out as yellow and blue dots. Here is an actual picture taken of us by Portland fans on Reddit. As I said before, we're the yellow and blue dots. Easy prey.

The inside of the Moda Center did not feel like the plastic hype of Miami or Los Angeles, where clapping gains you access to bask in the reflected glory of superstars. This hype came from true appreciation, so it seemed to me. The home crowd smelled blood in the water, and it was their own. Portland knew their team needed them. The crowd knew they had to be a factor (Copyright: Bill Simmons, circa 1998). And they brought it.

Every time the lead was cut to ten, the place erupted. These people cared. After Nicolas Batum loped back on defense, more than a few fans called him out on it. He's been doing it all season, allegedly.  And when it wasn't Nic Batum, it was Chris Kaman:

And when it was neither of them, it was Damian Lillard's defense. I love Lillard, and think that he has a good shot to become a complete player. He is already elite offensively and super-competitive; those guys tend to figure it out. Still, this chink in the Trail Blazer's armor is fatal until it is fixed.

Lillard will always be a step behind Mike Conley this year, never not smacking him in the face as he fails to stay in front.

It's Tuesday, our first day in Portland, and the wife and I are heading to Voodoo Donuts. It's only been recommended to us 7.9x10^5 times... well, I lost count, but it's been a bunch. The homeless circle up outside the cash-only establishment. The line wraps around the front of the building during peak times. The interior is all pink, and the donuts gleam deliciously in rotating displays. Rap music beats comfortably from the rafters.

And though the donuts are super delicious, I left thinking that the experience of being at Voodoo Donuts is better than actually eating the donuts. Or if not "better," at least "more singular". Days later, a few locals confided in us that Blue Star Donuts is actually better. We went there too.

I can't fault anybody for being passionate about donuts, or BBQ for that matter. Voodoo seems to be Portland's Rendezvous Ribs: an iconic eatery that trades on the experience of itself, rather than the quality of food.

Which leads me back to something I've circled around since the start: I can only trace the outlines of my experience. It is limited, flawed, and highly subjective. But I want to render my experience of Portland this way: Memphis is Portland's doppelgänger, and vice versa. They jut out crudely from each other, leering at the cast of the twins they broke. It's as if each sat down for a portrait from a caricature artist, and afterwards were both bothered by how closely the caricatures hit home.

Two port towns, each with ardent NBA fan bases. Each comfortable in their own skin and its own set of problems. Each probably aghast that I'm making this comparison, which is pretty much the reaction seeing your doppelgänger inspires. 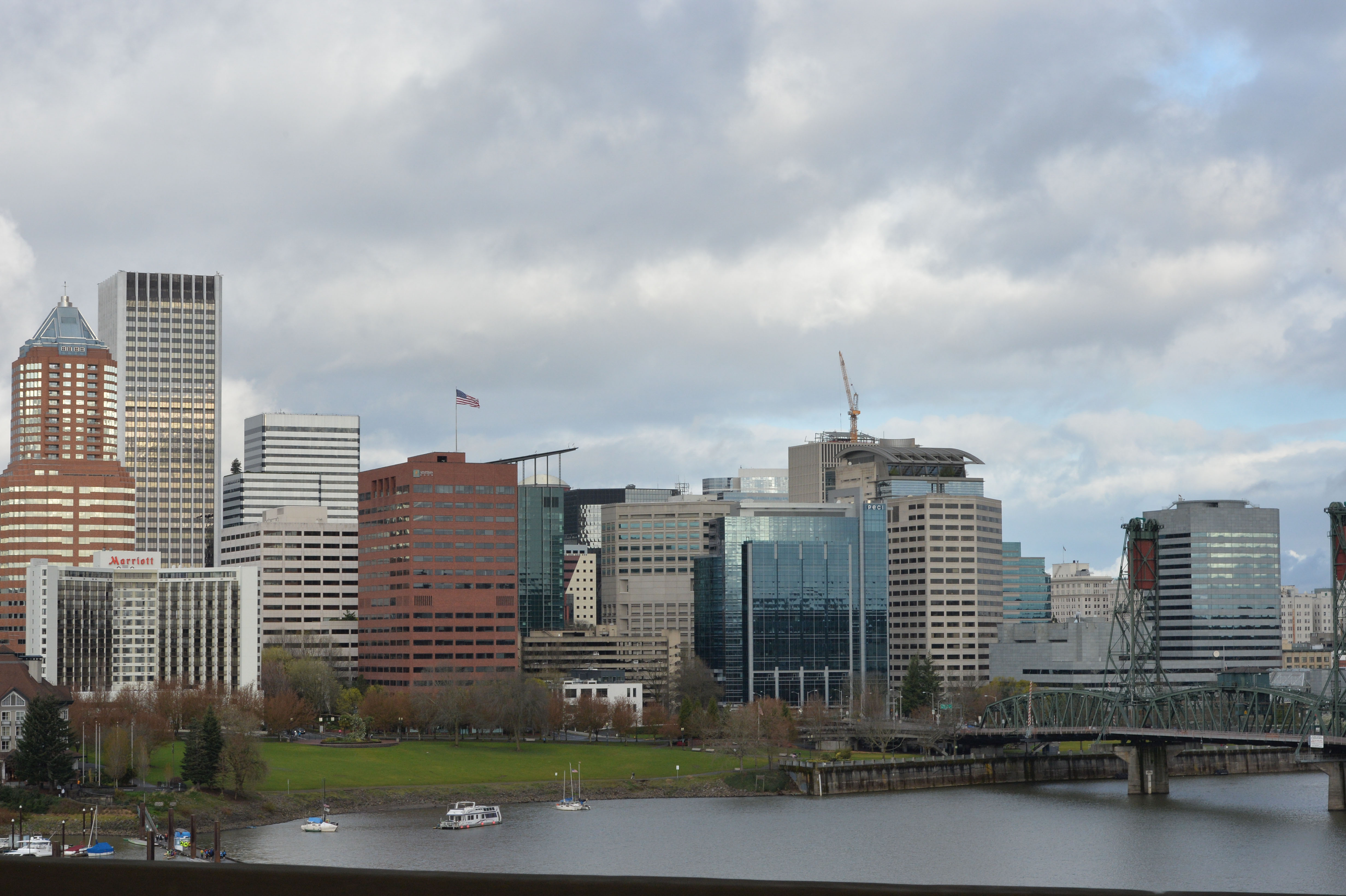 Portland has more strip clubs than I imagined – grit and grind of a different type I suppose – and while I had heard about them before I arrived, the Southerner in me expected them to be confined in their place. You know, like a Strip Club District or something. Hell, even New Orleans has the gentility to put them all on Bourbon Street so the proper folk can pretend they don't exist or, at the very least, not be tempted to go in until the day before Sunday.

Portland has more homeless people than I imagined, perhaps more than I ever saw in Memphis. They don't tell you about them when they're talking about Voodoo Donuts. I don't mean to cast the homeless into a sports article as a punchline; what I want is to describe as much as I can, and that includes the surprising number of people both cities have left behind. In both cities, you can walk within inches of a living, breathing people who have lost everything, including, for some, the will to get it back. It makes you remember that not everyone wins. That losing happens, every day, all the time, no matter where you are.

When the woman sitting next to me at the game apologizes for some of the people around me, it comes with a touch of Southern manners. And when one very nice older man offers to let me take Nic Batum back to Memphis with me – which is pretty much the only time in my life I'll be offered something worth $23 million and change for free (did I mention Sports, and Portland, are weird?) – I thought of how I used to feel about Rudy Gay.

When the Portland fans start complaining about the refs, roughly twenty seconds into the game – give or take, like, twenty seconds – I can't help but think of Grizzlies fans. Whining about the officials is almost always code for "our team is second best tonight". Lord knows we've had those nights.

During Game Three, the Blazers did get fewer whistles. Jeff Green got a few bailout calls. Once he tried to go one on four, threw the ball against the backboard, and the officials actually checked if it was a flagrant foul.

But Portland was also the less aggressive team, driving to the rim less often, meeting a Spanish or Greek monolith when they did. The officials weren't "why" the Portland Trail Blazers lost, but they were a more comfortable why than "our team isn't good enough".

And that's the hard truth of this series. Portland is a nice team, whose title chances this year were ripped in two with Wes Matthews' Achilles. And for a fan base that truly seems to care, for a fan base who goes into the offseason not knowing whether half of their top six players will return, this is a brutal way to go out.

The Port of Portland is open only intermittently now. The longshoremen labor union is engaged in a prolonged labor dispute with the private company who now manages the city's port. If your wedding dress is delayed, you can probably blame textile delays at this very port.

Setting aside the politics of local labor markets (here is a more in-depth piece if you're interested), the point nestled inside this point is that sometimes you don't really love something until it's taken away.

Pockets of Portland are constructed with such care that you can't help but love them. And part of that love, perhaps, is loss.

The section of Powell's Books, hawking books recommended from the fictitious points of view of Mad Men characters. Note: this is the only acceptable way "Atlas Shrugged" can be recommended. Somebody took the time to write these.

Perched atop a hill overlooking downtown Portland, every leaf, stone, and droplet of water inside a Japanese Garden has been arranged perfectly and peacefully in its exact place. It must have taken countless man hours to build, and tens of thousands to maintain. What drives the person raking each stone perfectly into place?

Only miles away, vineyards tessellate the hillsides, while tulips adorn them. This is the picture of Portland I take with me. Struggle and determination for something loved, something that could too easily be taken away.

The Grizzlies will probably win this series for many reasons. It's not just injuries that have done Portland in, but injuries coupled with a roster construction that has favored patience with young players over building depth. CJ McCollum and Meyers Leonard will both be good players at some point, but at this point, they are Arya Stark playing with Needle.

The acquisition of Chris Kaman has done nothing to shore up the Blazers interior, and key players like Nic Batum have regressed.

I haven't compiled a compendium of every NBA fan base, but Portland and Memphis are in the same phylum. If Memphis is the grittiest NBA city, Portland also receives votes. A man taps me on the shoulder and says, honestly, that he loves how the small markets take it to the big boys. The series isn't over, but after the game, the woman beside me wishes us good luck against the Warriors before she leaves. Thanks, I say, we're going to need it.