Gasol to the Spurs? Say It Ain't So

The Spurs have been the Grizzlies' nemesis for years now, the benchmark by which we measure our franchise. Could they steal our favorite son too?

Share All sharing options for: Gasol to the Spurs? Say It Ain't So

There's still a long way to go before July 1st, but I want to examine the Grizzlies' nightmare scenario. My coping mechanism with ghosts is to drag them into the light and just stare at them for a piece.

The ghost I'm dragging into the light right now is Marc Gasol in a San Antonio Spurs jersey. 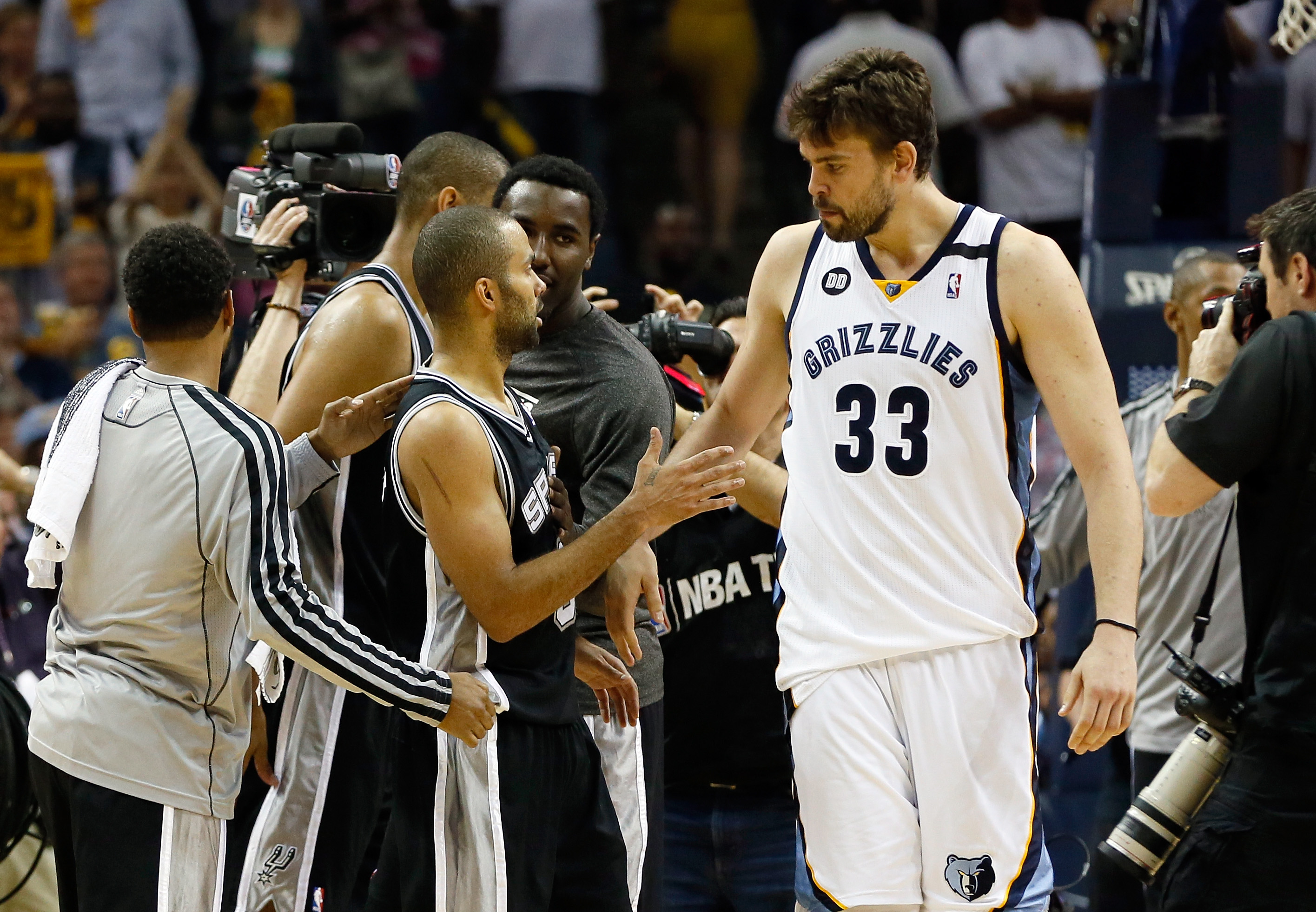 While many teams, including the Rockets and Mavericks, could carve out the money to sign Marc Gasol, I don't take any team as seriously as I take the Spurs. The Spurs are a model organization. They win with depth, innovative tactics, and superb coaching. They play the right way.

The Spurs have been linked with Gasol. They have the infrastructure, the outgoing free agents, and the young star in Kawhi Leonard. Gasol seems like the perfect center to whom Tim Duncan can pass his torch. It should be easy.

Well, it's not that easy. In fact, it's a hell of a lot harder than I thought.

Here are the major points:

1). Gasol will command a starting salary of $17,895,200 this offseason. A team must have that much room under the cap to sign him outright.

2). The Spurs have just $33.7mm in committed salary next year, and with a salary cap of $67.1mm, the resulting $33.4mm cap room seems to be enough to nearly sign two Marc Gasols.

Due to a pesky thing called a cap hold, if a team wants to go over the salary cap to re-sign one of its own free agents, they must carry a cap hold against the salary cap. Factoring in cap holds for Danny Green and Kawhi Leonard, a salary slot for their 1st round pick ($1,344,120 based on last year's numbers), and seven more minimum salary slots ($500,000 each) the Spurs essentially cannot keep Tim Duncan and Manu Ginobili, and get anywhere near sniffing distance of the max salary cap space necessary to sign Marc Gasol outright.

So let's assume Tim Duncan and Manu Ginobili retire. Here are the numbers:

The Spurs are about $4mm short. They could retain the rights to Danny Green ($7,647,500 cap hold) and Kawhi Leonard ($7,633,420 cap hold), but everybody else, including Tim Duncan and Manu Ginobili must be renounced. I believe the Spurs could retain Duncan or Ginobili by using the Mid-Level Exception, but this would be an unprecedented sacrifice for a player of Duncan or Ginobili's caliber. Either could also sign for the veteran minimum, just north of $1mm, but for the sake of this discussion, we're not considering that a viable possibility.

To recap, even after renouncing everybody other than Green and Kawhi, the Spurs have cleared $13,794,580 of room, still about $4mm short of a max salary. 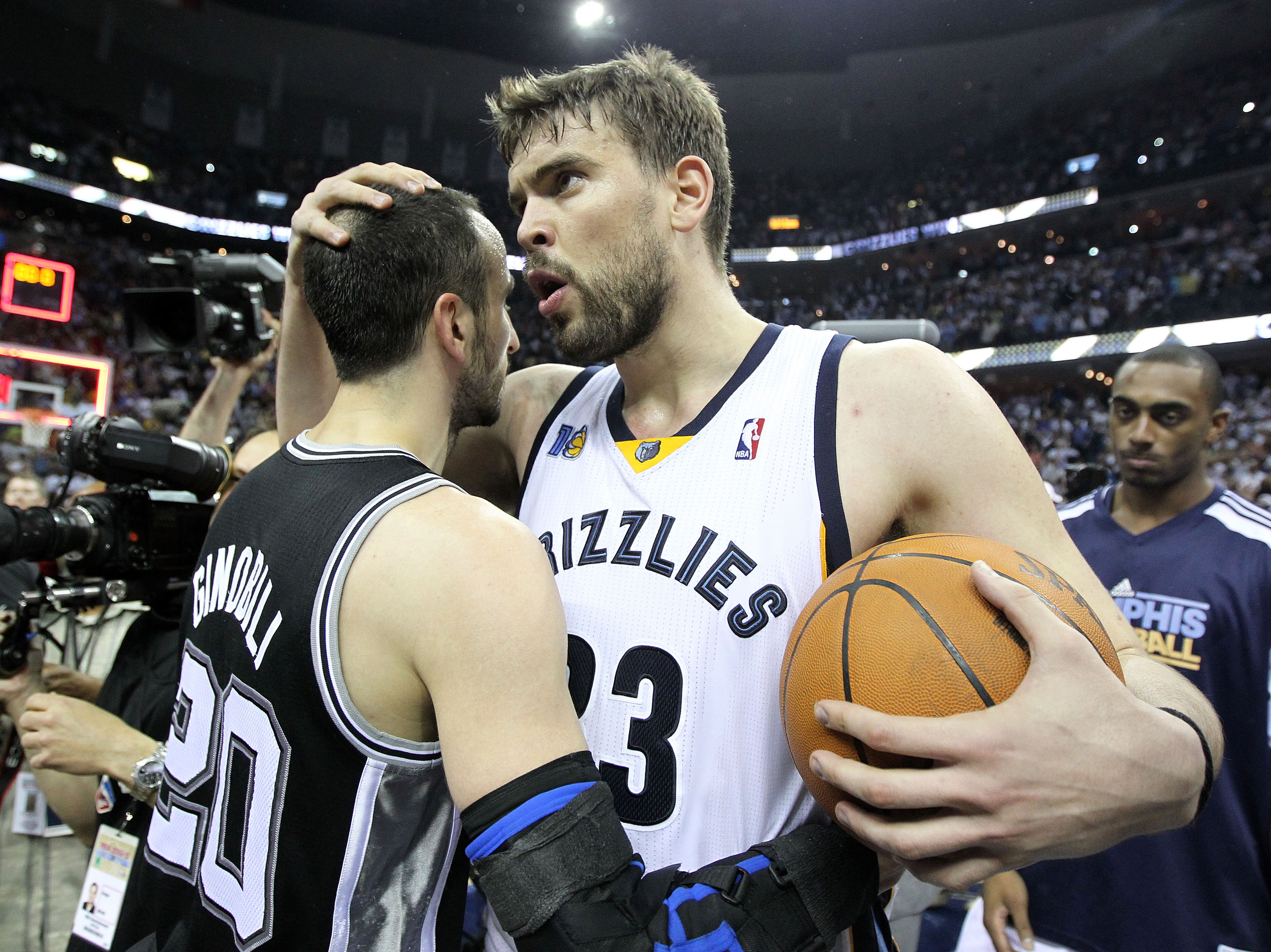 Someone's got to go. The choice comes down to Splitter or Green. You can't keep both, and add a max free agent. It just isn't possible. It seems natural that the Spurs would trade Tiago Splitter (and his $8.5mm salary), who would find himself surplus to the requirements with Gasol in the fold. If the Spurs can trade Splitter, and his $8.5mm salary while bringing back less than $4mm, they've got max cap space.

But look at what's happened. Duncan, Ginobili, Splitter, Bellinelli, and the rest of the bench. All gone.

But let's say the Spurs work their Spurs voodoo (Note: I AM NOT BEING IRONIC. THEY ARE WARLOCKS.) on Gasol and convince him to sign the max there.  A Spurs team that signs Gasol outright will look much different than they do now.

After adding in max salary for Gasol ($17.9mm), Kawhi ($15.5mm), and a competitive offer for Danny Green ($12mm per year, which might be the low end for him), the Spurs have access to the Mid-Level Exception and that's it. Filling the roster with anything other than minimum salaries takes the Spurs into the luxury tax.

Think of it this way. Would you trade Tim Duncan, Tiago Splitter, Manu Ginobili, most of the Spurs bench for Marc Gasol, and a Mid-Level Exception player? That is, literally, what the Spurs must do. Is this better than playing with the Grizzlies?

Now take away Popovich after one year, add another year of age to Tony Parker, Diaw, and is that Spurs team really a great destination? 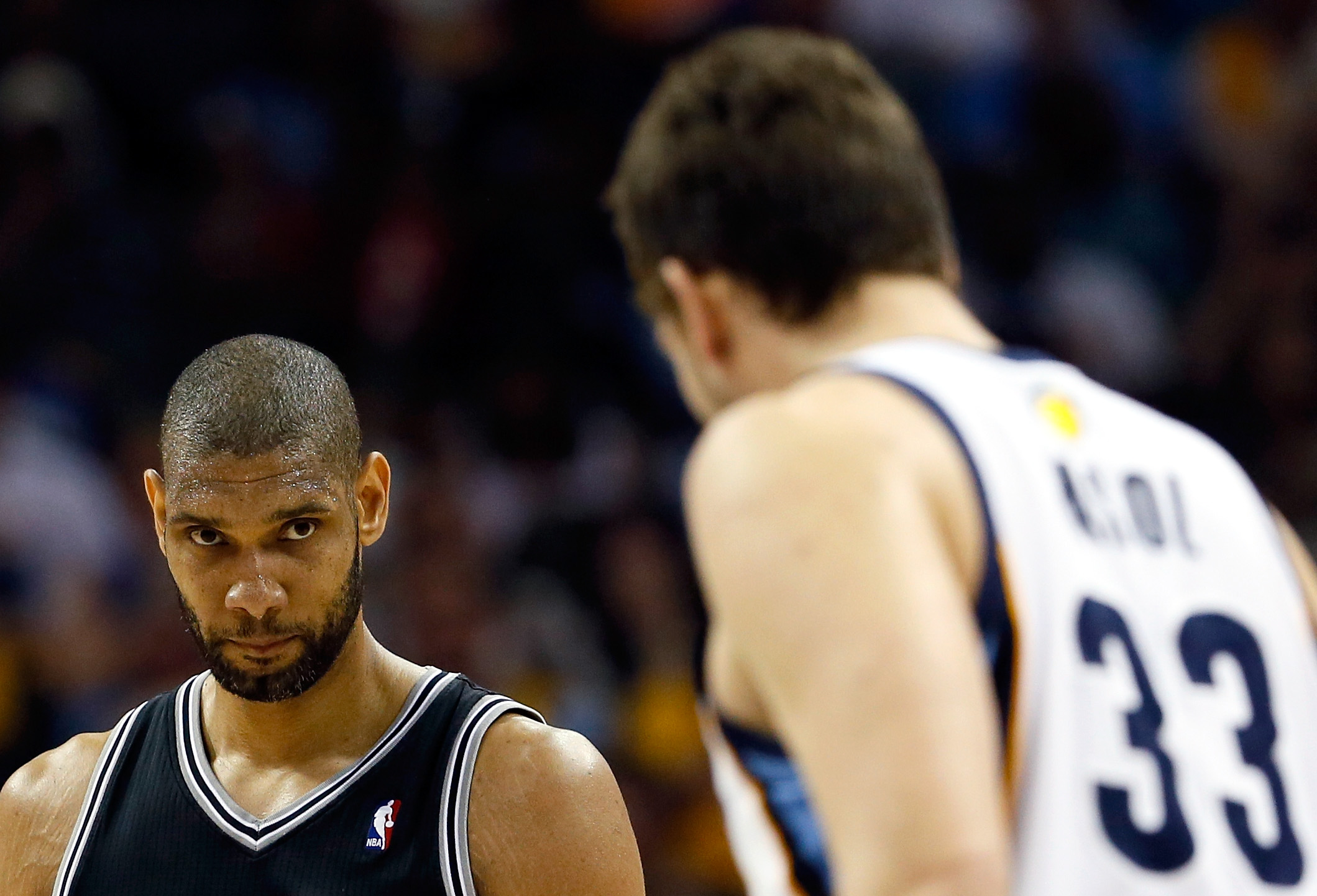 I don't think you can say it definitely is, and I would err on the side of no. I'm not saying Gasol won't sign with the Spurs, but if we are considering the scenario, we need to at least consider the correct one.

Popovich stated shortly after the Spurs' Game 7 loss that he wanted Timmy and Manu back for one more year. The math makes it clear that sacrifices would have to be made to sign Gasol. I think the most likely scenario is that this happens, and they run it back one more year.

This is the part where you think the horror flick ended. But it hasn't. The Scream mask is still out there.

Because now that we've unpacked the terror of the Spurs in the 2015 offseason, let me repack it a bit: they loom really, REALLY large in 2016.

Let's say Tim Duncan and Manu stay one more year, and the Spurs re-sign Green and Kawhi to long term deals. They sign whoever else they deem worthy to one year deals. There is some guesswork on the raises Kawhi and Green get, as well as where the 1st round pick lands, but this is in the ballpark of what the Spurs roster will look like in 2016 with and without a Mid Level Exception player signed this summer.

With the cap rising in 2016, the Spurs are already within striking distance of max cap room. Boris Diaw's $7,000,000 salary in 2016 is a team option, remove that and see where the numbers lie.

If the Spurs don't use their MLE this summer, there's your smoking gun that they're coming hard the next summer. They could conceivably slot Gasol (or any max level Free Agent) into the Duncan role in the summer of 2016 and not miss a beat.

Obviously, a ton can happen between now and then, both good and bad. Maybe Pop hangs it up. Maybe Kawhi becomes a top five player. Maybe Duncan retires this year, and the Spurs can't survive a post-Duncan world. Maybe Kyle Anderson develops into another Spurs late round steal. Maybe Tony Parker falls off a cliff physically. I'm not ruling out anything. And neither should you.

(*UPDATE: after I wrote all these words and spent several hours researching the feasibility of Gasol to Spurs thoroughly, I found that J.R. Wilco over at SB Nation's Spurs Blog "Pounding the Rock" had essentially done the same thing. Further proof that if you ever consider attempting to do work, you should just see if the internet has already done it.)