The hotheaded journeyman was more important culturally than statistically to this injury-riddled Grizzlies squad.

The Season in Numbers 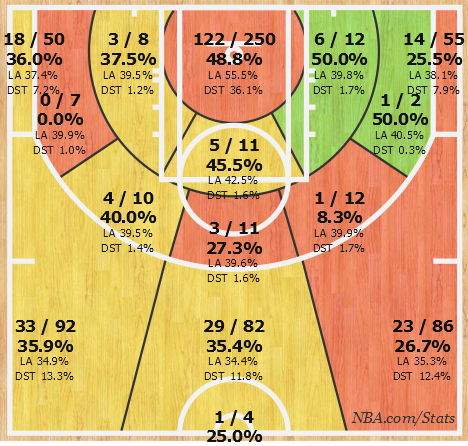 As you'd expect in a 13-year veteran, age is starting to catch up to Barnes. Compared to his last three years with the Clippers, his per-game shooting stats dipped in every column. But his "hustle" stats – assists, offensive and defensive rebounds, and steals – all ticked up. This is the mark of a man trying to contribute in ways other than scoring as his career winds down, and it came in particularly handy as the Grizzlies roster started falling apart in the last half of the season. (Not to say we wouldn't have liked to see a little more green outside the arc in those charts.)

Highlight of the Year

Barnes was the hero of a December game against the Pistons. This shot was submitted to the "Worst Ideas That Turned Out Great So Whatever" video compilation of 2015.

Lowlight of the Year

Barnes let John Henson's loudmouthing get to him in garbage time against the Bucks. After Henson was ejected, Barnes followed him to the Milwaukee locker room to return his wallet (or something like that). I especially love the part of this video where Joerger is holding onto Barnes shirt, who then rips himself away like a toddler in the toy aisle.

Raise your hand if, when the Grizzlies acquired Barnes over the summer, you thought he'd be the fourth or fifth craziest Grizzly on the roster by the end of the year. I sure didn't expect Barnes to be a leader in a locker room that included Zach Randolph, Tony Allen, and Marc Gasol. But as the injury dominoes started falling, Barnes' commitment to team and franchise grew, to the point where he and fellow veteran Vince Carter insisted on playing every last meaningless minute against the Spurs in the Grizzlies' final game at home, seeing this wreck of a season through to its very end. Barnes was accepting of every new player that came through (all two dozen of them), doing his best to floor manage a team of rookies, D-Leaguers, and 10-day contractors. It was awesome and bizarre to see the class clown turn into a substitute teacher.

I hope Barnes is back next year (another sentiment I didn't predict 10 months ago), and I hope that the Grizzlies ship is rebuilt to the point where he can return to specializing in off-the-bench energy boosts and sharper three-point shooting. His skills are valuable to the Grizzlies, but he simply wasn't positioned well enough this year to use them.