What do you get for a team that has it all? A talented big that they don't need right away.

Malik Beasley and Damian Jones went off the board yesterday in our Community Mock Draft, and today we wrap up this year's mock with the San Antonio Spurs and Golden State Warriors. Two teams who don't need much, but there is potential to be had here at these late selections. The San Antonio Spurs, and their Mock GM Jill Kong, are on the clock. 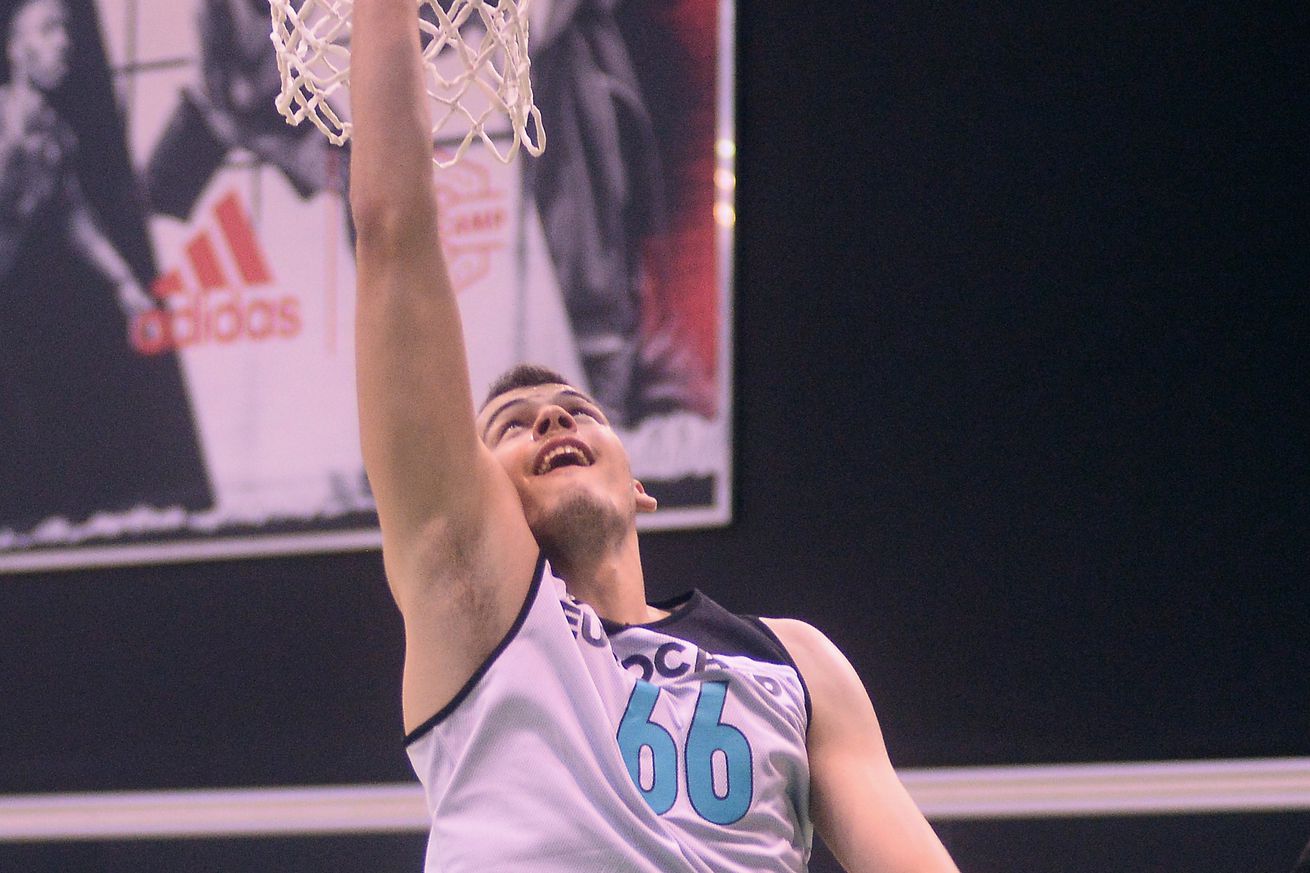 Jill goes for fit and size at #29 overall. Here are some of her thoughts on the pick-

In the likely case of Tim Duncan, Manu Ginobili and Boris Diaw retiring in the near future, the Spurs still have an elite core group consisting of LaMarcus Aldridge, Kawhi Leonard and Tony Parker to continue their pursuit of a championship. They also have serviceable role players in Danny Green, Kyle Anderson and Patty Mills to provide further help. However, they don't seem to have many young pieces working from the paint to build for the future, especially at center position. Boban Marjanovic is a restricted free agent this summer and he is far from a surefire answer at the 5. Of course, the golden rules of NBA draft says you take the best available, but if there's a prospect available who is one of the best among the rest and fills a need on the team, it should be a no-brainer to take him. Enter Ante Zizic, 19-year-old big man from Croatia.

Sporting a 6'10", chiseled body, Ante Zizic looks like a modern day NBA big from first glance, though he's far from a freakish athlete. Although lacking in the ways of crazy athletic attribute or tremendous size advantage, Zizic's solid athleticism, balanced strength and fluid mobility allow him to serve various functions as a role playing big. He crashes the boards with high level energy, fills the lane with fluidity, gives relentless effort on the defensive end to compensate for his lack of elite physical tools, and puts the ball in the basket with great efficiency when the chances come. At a draft position that doesn't have much starter level talent left that fit the Spurs ideology (playing solid defense, being able to switch, scoring with efficiency and being a willing passer), it's safer to draft a potentially good role playing big who can fill various roles for the Spurs. This makes more sense than to go for gambles that might not be good fits such as Zhou Qi, Cheick Diallo or Diamond Stone.

On the offensive side of the ball, Zizic doesn't have high upside due to moderately low skill level and lack of scoring instincts, but he can certainly fill various roles efficiently. With solid mobility and good instinct to fill the lane, he is a good roll man in PnR situations while the Spurs offense relies heavily on PnR execution. Shooting inside the arc with 63.9% accuracy, Zizic can reliably put the ball inside the hoop when chances arrive. He's aggressive with the ball on the low block while able to use his size and strength to score on opponents; though not an overly skilled scorer, he has good touch and basic mechanics to score on the low block as well. He's not a good passer and his feel for the game isn't great, but being a willing passer, plus adding the good merit of the development program from Spurs, he can be developed into a capable passer in time. He also has the mechanics and smooth feel as a base to develop efficient mid range shooting ability, even though he rarely shoots the ball playing for his European club.

While Zizic isn't projected to be a great defender, he does have the tools and effort to develop solid defensive ability in time. He moves his feet well on the perimeter, makes effort to contain the ball, slides down to low block fluidly to contest shots, and uses his strength and aggressiveness when guarding the low post. His defensive fundamentals still need improvement and he doesn't have the physical tools to dominate on defense, but he can certainly be developed into a versatile defender with high energy.

Zizic likely has the most upside in terms of rebounding and his high motor really shows here. He uses his size and strength to battle for positions, has excellent rebounding instincts and relentlessly pursues loose ball outside of his area. At Cibona Zagreb this season, Zizic grabbed 8 rebounds every game in just 25.7 minutes of playing time. At the NBA level, he can possibly develop into an elite rebounder.

A project of a big is off the board. Who will Golden State take to wrap up our Mock Draft?