NBA Playoffs 2014: How the Game-Winning ATO Play by the Grizzlies Came to Fruition

The Grizzlies stole a game from the Thunder in Oklahoma City! Weeeee! The game was sealed on a beautiful play late in the game after a timeout. Just how did what turned out to be the game-winning play come to be?

Share All sharing options for: NBA Playoffs 2014: How the Game-Winning ATO Play by the Grizzlies Came to Fruition

Griz Grades: Breaking down every performance

Find out how each player did in last night's win over OKC.

Griz Grades: Breaking down every performance

In what was the biggest timeout of the season for Memphis, first year NBA head coach Dave Joerger was furiously at work on his clipboard, directing the ensuing moves of the chess pieces that are the Grizzlies players with just a stroke of a dry erase marker. The following play turned out to involve a stroke, too. This time a stroke of genius by Joerger.

So, how exactly did the game-winning play that Joerger drew up in that pivotal moment unfold for the Grizzlies?

Let's break it down.

First thing's first, the Grizzlies must get the ball inbounds. Even that part of the play, something that could have been dull to the point of risking a stolen pass, is beautifully drawn up and executed. The first action that takes place once the offense is set and Mike Miller is given the ball by the ref is a curl around Mike Conley by Courtney Lee. Once Lee curls around Conley, he heads to the opposite elbow where he is going to set a back screen on Zach Randolph's man to free the big man up so he can execute his own action. 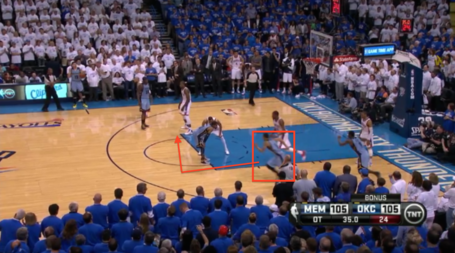 As Lee sets the pick, Randolph sprints to the opposite elbow to return the favor and set a back screen on Conley's man. 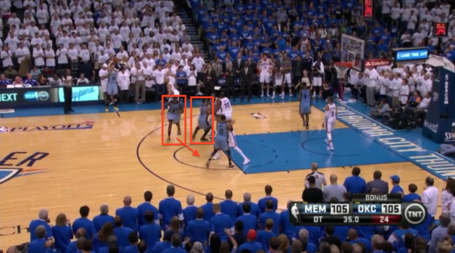 Conley utilizes this back screen to free him up to pop out and receive the ball beyond the perimeter. Again, Joerger could have gotten lazy and just tried to throw the ball directly in to Conley without all this movement and misdirection, but by doing that the Grizzlies would have risked getting the ball stollen by a quick, athletic Thunder defense. Joerger wisely didn't leave it up to chance. 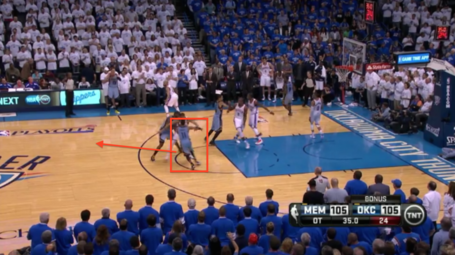 Once Conley receives the ball, the play begins to develop. First, every Grizzly is in an ideal position to space the floor. Lee is in the strong side corner, Tony Allen is in the opposite corner, and Miller is standing on the wing. All of these guys are in great position to receive a pass for a wide-open shot if their man decides to help down to cut off Conley's penetration or put another body on Randolph as he rolls. With that said, let the pick & roll begin. 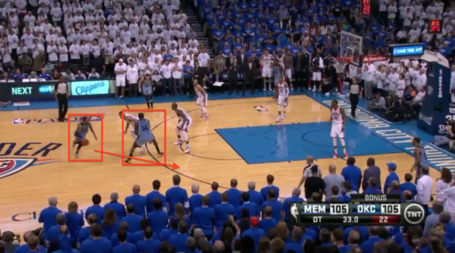 As the pick & roll between Conley and Randolph develops, it becomes obvious the Thunder have it defensed well. Randolph continues on slowly to the low block though to set himself up in what will be a key spot later in the play. 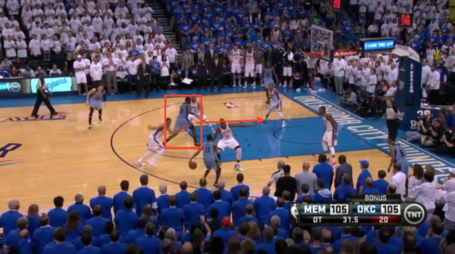 Randolph is always a major threat as the roll man, and the Thunder treated him as such. Allen's man helped down from the corner to put himself between Randolph and the basket. Help defense in this situation is not a bad idea, but Russell Westbrook gets caught sinking in too deep, leaving Allen with an unimpeded path to flash cut above Randolph into the lane to receive a pass in advantageous spot. 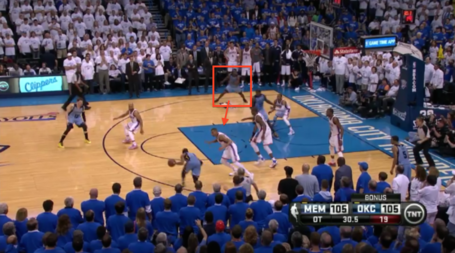 Conley gets the ball to Allen on the cut, and Allen takes off towards the right side of the rim with Westbrook trying to recover defensively. 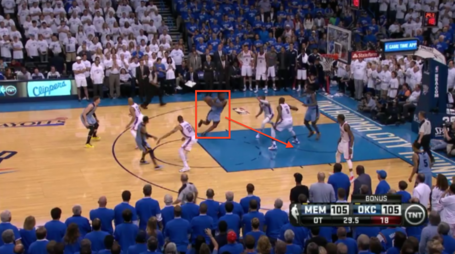 Once Allen gets near the rim, this is when Randolph's positioning means so much. Serge Ibaka is forced to pay too much attention to Allen's drive while Westbrook recovers. Meanwhile, Randolph is floating dangerously behind the defense. Allen pump fakes, and when he finally does rise for the shot, Ibaka leaps to try to reject the shot. Right at that moment, Allen releases a little dump pass to an unguarded Randolph almost directly under the basket. Right about now is when the Thunder realize they have messed up, and the Joergermeister has played them. 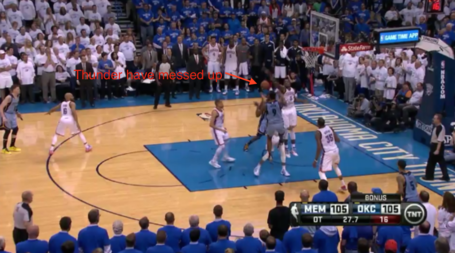 Once Randolph receives the final pass from Allen, he's left to finish off the easiest shot he got all night. Of course, Randolph got buckets. 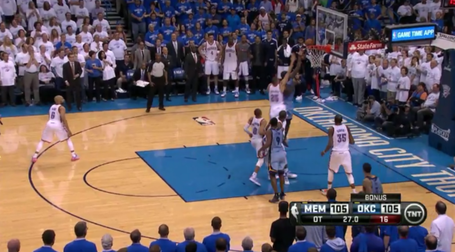 Memphis was able to dupe Oklahoma City with thee fundamental actions that the Grizzlies offense is predicated on: curls, cuts, and off-ball screens. Joerger was able to draw up a play that was so simple, yet so refreshingly beautiful. Which, when you think about it, is just downright Grizzlies. See you for Game 3 in Memphis.