The Grizzlies' offense has often been stagnant in their series against the Thunder. Joerger should consider adding a couple more tools to the toolbox to breakdown the defense. A post pick & roll fits the bill.

Memphis' offense has been mediocre all season. Although head coach Dave Joerger has implemented more off-ball movement and some new sets, there is only so much he can do differently from his predecessor Lionel Hollins with a mostly similar roster.

The Grizzlies have long been a pick & roll heavy team, but when that has broken down against the Thunder in the first round of the 2014 NBA Playoffs, the offense has tended to stagnate. However, there are still ways for Joerger to maximize a roster that doesn't really fit his offensive philosophy.

It is hard to think of a time in NBA history in which one team faced more adversity heading into a Game 7 than the Memphis Grizzlies will tonight.

Joerger could cater to this roster's strengths and have a new wrinkle to call on to hurt the Thunder if he were to implement a tight post pick & roll. It has been used before by this Grizzlies squad, but not enough to consider it a staple in the offense like it could/should be.

Let's take a look at what a tight post pick & roll would look like for the Grizzlies. The example I'll be using is the one time the play was run during Game 6.

Mike Conley brings the ball across half court and tosses it off to Zach Randolph on the right wing. Randolph then turns his attention to the post where Tayshaun Prince is sealing his man. Randolph then makes the post-entry pass. (Side note: People love to dog Prince, but he can still add offensive value. One way he can do this is by posting up against much shorter opponents. His long arms give him an immense advantage in matchups like that. He shouldn't touch the ball a lot in any given game, but getting him 3-4 touches a game on the low block against a shorter defender makes sense.) 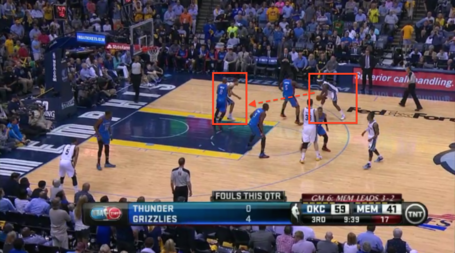 When Prince touches the ball, the next action is triggered. Marc Gasol and Randolph cut in opposite, diagonal directions stunting across the lane to set things up. Randolph is moving to the opposite low block, taking his man with him to free the strong side up for Prince and Gasol. Gasol heads down to set a pick for Prince. 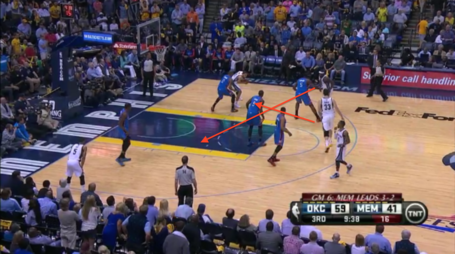 Gasol sets the pick for Prince, and the tight post pick & roll begins. Prince hugs Gasol's hip perfectly going around the screen, which is crucial to the development of the play as you will see soon. 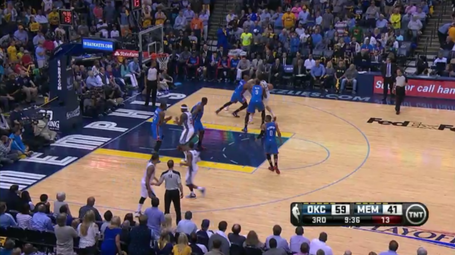 Now is when the work Prince did to make sure he hugged the screener's hip as tightly as possible begins to pay off. When he turns the corner to curl off of the pick back into the lane, his defender is now a step behind him because he was forced to trail Prince after he was not allowed to slip between the screener and the ball handler. This forces Gasol's defender to pick his poison. He can either slide back and cover Gasol so Prince can't hit him on the roll for a wide-open layup, or he can step up to cut off Prince's penetration into the lane. Neither is a great option. The big defender picks the former option, sliding back to cover Gasol. Thus, Prince continues his sprint into the middle of the paint to open up more options. 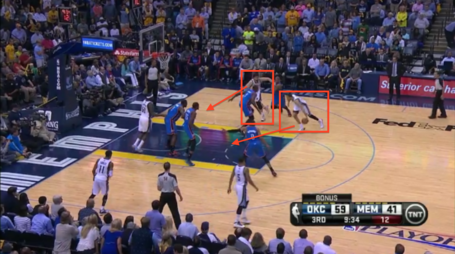 Once Prince gets to the middle of the paint, he recognizes that the defense has converged to the lane to cut off an easy bucket. This leaves Conley wide open in the corner. Prince makes the smart kick out, forcing the Thunder defense to begin scrambling. If the defense had not converged on Prince, he could have taken it to the rim himself or had an easy dump off to either big. It's a read play for the ball handler that supplies multiple good options. 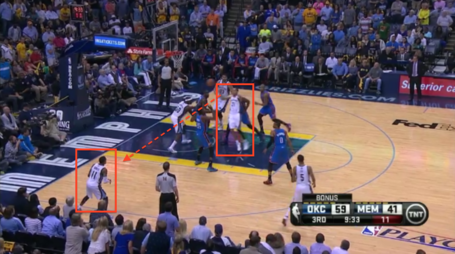 Once Conley receives the ball in the corner, he has a choice to make. He can either shoot the corner three or attempt to drive past his man into the paint. Conley reads that Durant, the man closing out on him, has long arms that will be tough to shoot over. Also, Durant closes out really hard, making him susceptible for a blow by. Conley chooses to put the ball on the floor and dribble right around Durant into the paint. 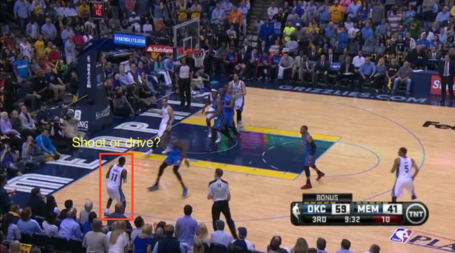 Conley is able to get to the rim, but Serge Ibaka gets the block. Don't be fooled by the result though. It's still a quality play with multiple options, and it's far and away better than a post isolation. Despite the block, Conley had a really easy look at the basket from point blank range. The Thunder have excellent length that allows them to challenge shots at the rim, but they won't get every one, and that play is bound to break down even the best NBA defense once or twice. Keep in mind that Prince doesn't always have to be the ball handler. Conley could post up his man, and a guy like Courtney Lee or Mike Miller could be in the opposite corner. 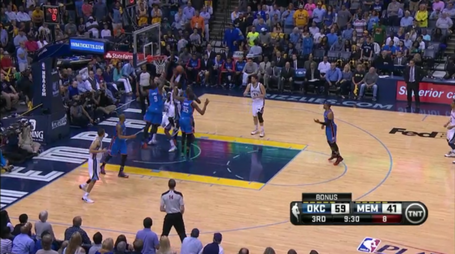 To watch the full play, check out the video below.

To give you visual evidence of all the options this play provides, look at how the Houston Rockets use the tight pick & roll. It's a play they run frequently with great success.

The reason this is such an interesting wrinkle is because it's really an inverse pick & roll that actually begins working away, not towards, the rim. It's something that catches defenses off guard, because they still don't see it too often. Also, with multiple options, the defense is forced to react quickly under pressure, which often leads to a breakdown. If a play provides multiple options, gives you a good chance at breaking down the defense, and often gives you a good look at the rim, that's really all you can ask for in an offensive possession. The tight post pick & roll provides all of that, making it an excellent play to go to multiple times a game. No play has guaranteed success, but this is a great option, and it might be something Joerger should consider implementing to keep his offense from combusting in flames.