Courtney Lee began his Grizzlies tenure on fire before fading late last season. How will things look for him in his first full season on Beale Street?

Fit can make or break an NBA player's career. A team's competitive timeline, offensive and defensive schemes, roster depth, and even politics are all deciding factors in whether a player fits on a given team. The right fit has eluded Courtney Lee since he entered the league when the Orlando Magic selected him with the 22nd overall pick in the 2008 NBA Draft. He's played for five teams in his first six seasons, and he's yet to find a place where his skillset aligns with the role a team needs him to perform.

Even with the Grizzlies last season when Lee came over in a trade with the Boston Celtics, the fit wasn't ideal. He provided three-point shooting and excellent movement off the ball, two things the Grizzlies desperately needed, but he was still required to do too much by necessity. With Tony Allen missing an extended period of time due to injury, Lee was forced to assume a spot in the starting five, a role he's familiar with, but one that does not necessarily best suit him.

Lee played too many minutes, shot too many times per game, handled the ball more than he should, and matched up defensively against guys that often exploited him. He's meant to be a role player, not a starting two guard in the NBA, and that, not a lack of ability, is why so many teams have shipped him away after nary a chance to even get his feet under him.

Unlike last season, the Grizzlies are currently overflowing with depth on the wing. This offseason, the Grizzlies went out and replenished their wing depth by adding Vince Carter via free agency and Jordan Adams via draft. Also, Quincy Pondexter and Allen, both guys that missed a large chunk of time last season, are poised to return fully healthy to begin the new campaign.

With all the additional firepower, Lee can slide into a role that better suits his skillset. He will be able to come off the bench rather than start, and that should take care of some of his aforementioned issues i.e. forcing too many shots and guarding guys that are incredibly difficult for him to check.

In his new, more defined role, Lee will be able to solely focus on what he does best, which is get himself open for jumpers. His outstanding utilization of screens and an uncanny ability to time his movement perfectly when his defender is ball-watching make him an excellent offensive player off the ball.

Of course, getting open in and of itself is not that valuable if you can't knock down the resulting shots. Lee is a streaky shooter, but he has always shot a high percentage from deep, particularly when he sets his feet. Last season, he was 38.6% from beyond the arc in spot up situations. Having more guys on the roster than Mike Conley that can penetrate the lane on a regular basis will be largely helpful, and it should create ample shooting opportunities for Lee.

Aside from spotting up, Lee can also pick and choose his moments to break his man down on the dribble and drive. Last season, Lee had to force a little bit more than he needs to in order to create offense, but now he can focus on being solely a secondary option.

When Lee can play his game offensively, he's a versatile scorer, as is proven by his shot chart. 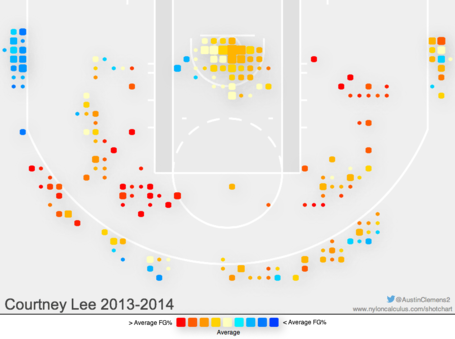 He can score in almost every way, and he's a rare case of a guy in the NBA that still shoots a great percentage from mid-range. His efficient finishing at the rim is a product of him cutting off the ball and leaking out in transition to get easy looks, and that's always welcome for a Grizzlies team that struggled too often offensively last season.

In a perfect world, all the wings in front of Lee stay healthy, thus allowing him to play his role and do no more. The lightened work load liberates him, and he plays looser as a result. His impeccable shot selection coupled with his ability to get open off the ball allow him to flirt with the 40% mark on three-pointers. Defensively, he doesn't have to match up with the Russell Westbrook's and Monta Ellis's of the world that exploited him last season on pick and rolls, and he shows that he can be a quality defender against all but the top level of guys.

For Lee to fall to his floor, Tony Allen and/or Vince Carter likely have to get hurt during the season. If the wings slated to play in front of Lee get injured, he'll be forced to step up and carry more of the load than he should on both ends. History will repeat itself, and Lee will end up forcing things to the detriment of the Grizzlies. He will have to check Russell Westbrook, Jamal Crawford, James Harden, Klay Thompson, Tony Parker, etc. at times, and that ends how you'd think.

Lee's a solid player who might just need a defined role on a competitive team to succeed. He should get just that this season, and it should make him far more comfortable than in year's past. Lee won't hit the 40% mark on three-pointers, but he will shoot a decent 35%, and he will help the Grizzlies old school offense to continue spacing the floor the way they need to for Zach Randolph and Marc Gasol to go to work in the post.

He will likely end up trying to do too much and force things at times out of habit, and Joerger will have to remind him of his role. He won't shoot as poorly as he did last season in the final stretch of the season when the team is vying for better playoff positioning, because that would be really tough to do. Overall, Lee will be a nice, complementary piece on what should be a very good team in contention for a top four playoff seed, even in the West.

After cycling through countless new cities, teams, coaches, teammates, and systems, Lee might have finally found the perfect fit in the 2014-15 iteration of the Grizzlies.